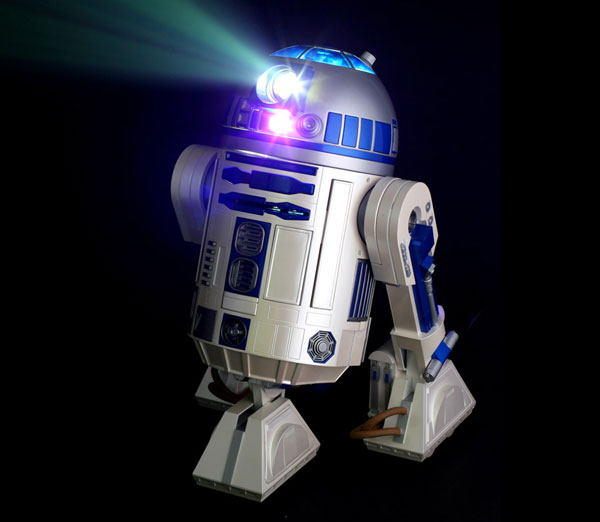 Online distribution of video content—especially high-def video—will never float my boat until the bandwidth available to most homes is way faster than it is today. According to Speedtest.net, in 2010, South Korea had the fastest average household bandwidth at 22.46 megabits per second, while the US was 30th in the world at 7.78Mbps—that’s less than Latvia (18.02Mbps), Lithuania (15.81Mbps), and Liechtenstein (7.79Mbps). But even in Korea, streaming high-def—not to mention anything with even higher resolution, like 4K or UltraHD—requires some serious compression, which lowers the picture quality dramatically.
An incredible solution to this problem was quietly demonstrated in a hotel suite at CES this year by a company called R2D2 (“Twice the Research, Twice the Development!”). The company’s Hypernet technology bypasses the Internet completely, offering nearly unlimited bandwidth and instantaneous transmissions using the principles of quantum physics. Inventor Leia Organic Skydancer, love child of two spaced-out hippies, is a video artist and musician as well as a physicist and computer scientist who created Hypernet so she could effectively market her own material, including her first project, Music From the Hearts of Hyperspace.

Hypernet uses quantum computers, which were first conceived when it became clear that electronic miniaturization was going to continue unabated. Physicists have started to consider what would happen if the individual elements within an integrated circuit were single atoms or even photons, which led to the concept of the quantum computer. In such a machine, the principles of quantum physics, especially the idea of parallel universes, would affect the computational process. In particular, this could increase the speed of computation immensely, because it would occur in many parallel universes simultaneously.

These ideas inspired Skydancer to develop a prototype machine she calls a hypercomputer. The processing speed is measured in yottahertz (YHz), which is equal to quadrillions of gigahertz, thanks to the massively parallel processing made possible by quantum computing.

To bypass the bottleneck of the Internet, Skydancer needed a new form of telecommunication, and quantum physics provides an answer here, too. It has been known for some time that the law of energy conservation is violated for brief moments in the intergalactic void, where particle density is quite low. Under these conditions, photons and other subatomic particles wink into and out of existence, creating a momentary, virtual electromagnetic field. Cosmologists call this the zero-point quantum field because it occurs at temperatures near absolute zero, which R2D2 engineers refer to as “luke warm.”

Skydancer discovered that these virtual photons allow instantaneous communication via the “metaverse” from which they come and to which they return, because the speed-of-light limit doesn’t apply there. She then invented a quantum modem that sends data through this metaverse by modulating and demodulating the virtual photons.

The CES demo included full-motion, real-time, UltraHD video of several musicians at different physical locations jamming together. Each one was in a separate window on the screen with none of the herky-jerky effect that we’ve come to expect from current technology. (When one of the musicians began improvising on an unfamiliar instrument, our host explained that it was a han solo.) Then, Skydancer logged onto a prototype hypersite, selected a 100GB movie clip, and downloaded it in under a second. With capabilities like this, Hypernet is bound to replace the old, clunky Internet as quantum computers and modems become widely available. Until then, may the farce be with you!